The last steel bike to win the Tour de France, was a Pinarello ridden by Miguel Indurain in 1994. It weighed 9kg.

Given that Indurain likely had the ‘best of the best’ in terms of equipment available at the time, it’s fair to assume that most of the old steel framed bikes getting around today weigh considerably more. So why do people continue to ride them?

According to bike builder Bradley Woehl “Riding a good steel bike…is the closest thing to flying without leaving the planet”.

This weekend scores of like minded riders will tackle unsealed gravel roads, punishing climbs and white knuckle descents on their steel framed bikes at the Noosa Strade Bianchi.

The Noosa Strade Bianchi began in 2011 to “pay homage to the ‘golden age’ of cycling” and is is strictly for steel framed cycles with downtube shifters. You won’t find any carbon fibre frames, STI or Di2 shifters at this event.

This year there are 4 rides to choose from, the 33km Piccolo Fondo at 6:30am on Saturday 11th August, the 162km Mark Dolan Imperial Century, 137km Gran Fondo and 82km Medio Fondo all of which roll out at 7:00am on Sunday 12th August from the Noosa Marina.

If you live on the Sunshine Coast and own a steel framed bike, there’s a fair chance you’ve already booked your ride at the Noosa Strade Bianchi. If however, like me, you don’t own one of these beautiful vintage bikes and are interested in purchasing one, or simply spending an hour or two admiring the workmanship of traditional frame builders, the Show and Swap Meet vintage bicycle show, may be of interest to you. Admission is FREE.

WHAT TO LOOK FOR

“Steel is versatile, strong and relatively affordable — but its popularity has also spawned shoddy versions not worth their cost. Just ’cause it’s steel, doesn’t mean it’s good”, says frame builder Bradley Woehl. “Start by checking the grade of the steel. Chinese-made frames often don’t list a grade and are heavy and poorly constructed; the best way to tell quality steel from junk is to simply pick it up; steel is heavier than aluminum, but quality frames are still on the light side. Chromoly is a safe bet, as is higher-grade steel like Reynolds 853. Classic steel frames and higher-end models often use lugged construction or fillet brazing, both of which are beautiful but expensive. The more modern construction uses a stronger TIG weld, which works just fine”. 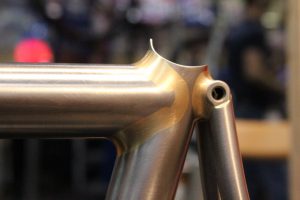 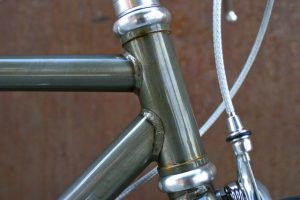 On Saturday evening from 6.00-9.00pm there’s a ‘Meet and Greet’ Cocktail Event happening at the River Deck Restaurant. Cost is just $25 per head which includes platters of finger food presented over the 3 hour period with a complimentary drink of a tap beer, soft drink or house wine upon arrival.

Frame builder, Paul Ketelaar will unveil his purpose-built NSB bicycle, to be ridden Sunday, and talk about his work, whilst ‘The Russian’, Nikolai Razouvaev, will speak of some of his experiences in the 70’s and 80’s Soviet cycling program and winning races around the world as part of the red squad.

Book your spot at the Noosa Strade Bianche Registration Page.

Previous Post Just How Low Can You Go? Next Post Hydration – How Much Water Should I Drink?